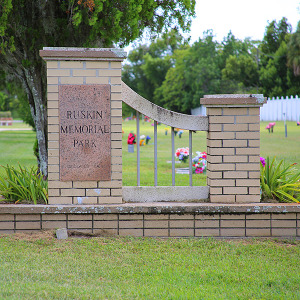 The Ruskin Cemetery, or Ruskin Memorial Park, as it is called today, was founded in 1903 by Ruskin’s early settlers. The land where the park is located was donated by the Dickman family at the time that Ruskin was founded. The land was chosen as a burial place by these early settlers because it was the highest and driest ground in the area. When flooding occurs during our rainy season, this ground remains dry.

In 1964, the Ruskin Cemetery was rededicated and renamed Ruskin Memorial Park. Plots here contain remains of many of the area’s founding families, including the Dickmans, whose first family headstone is dated 1879.

As part of an expansion program that began in 1999, Ruskin Memorial Park doubled in size with the addition of a mausoleum and memory garden.

Through the efforts of dedicated volunteers and community members, Ruskin Memorial Park will continue to serve our residents into the future during their time of need, providing a beautiful resting place for their loved ones.